You can hear evidence of possible Covid-19, through people sneezing or coughing. You can see it, through the results of testing. But now scientists may have found a way to smell it as well. Mirjam Guesgen explains.

First published on The Spinoff. 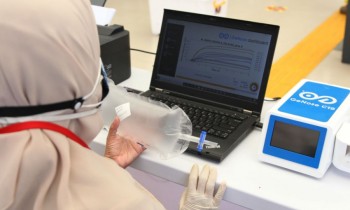 OFFICERS CARRY OUT AN INSPECTION WITH AN ELECTRONIC NOSE, A RAPID DETECTION TOOL FOR COVID-19 FROM BREATH, AT PASAR SENEN STATION, JAKARTA.

Electronic noses, or e-noses, are devices that can tell if someone may be infected with a disease like Covid-19 by analysing a person’s smell. Able to give a readout within a few minutes, think techy version of dog noses for sniffing out disease.

E-noses aren’t something that are about to be rolled out in New Zealand just yet, but trials to put the noses through their paces are currently under way overseas and researchers here and in Australia are pitching in on the science side to try and make Covid-sniffing machines a reality.

As borders reopen worldwide, and people flood into concerts or sports events, their advocates say they offer potential for a complement to existing systems – a fast, accurate way to detect if someone’s infected with the virus.

The devices work by analysing compounds in a person’s breath or coming off their skin. It’s not a new tech specific to the current pandemic. E-noses have been around for a while to smell for disorders like asthma or chronic obstructive pulmonary disease, infections like pneumonia, or cancers including lung and prostate cancer.

They’re able to do that because the body gives off a certain scent that comes from chemicals made as the body goes about its business of living (metabolising). These airborne compounds are called volatile organic compounds or VOCs.

“It’s an indirect detection. The assumption is that a change in the metabolic profile is uniquely associated with the presence of Covid or other disease,” explained chemist Mark Waterland from Massey University.

E-noses can look a bit like a nasal spray tube that you jam into your nostril, or like a Capri Sun pack with a straw and a bag you inflate. When an odour hits chemical sensors in the device, it triggers some physical change that’s turned into an electric signal. The electrical signal is then analysed by an artificial intelligence algorithm. All in around two to three minutes.

The algorithm works like lots of other machine learning algorithms. Give it some data to learn from, in this case the breath from people who are known to have or not have Covid-19, and then let it loose on a different set of people to test its ability to pick infected from not.

There are a bunch of e-noses floating around in the Netherlands, Israel, Indonesia and the US, among others. Even Nasa is remodelling one that was originally designed to measure air quality in space crafts.

Of those that have been trailed so far, the devices were able to pick up on people who had Covid-19 between 61% and 99.6% of the time (or missed people up to a third of the time) and correctly detected people who didn’t between 79.8% and 92% of the time. It’s a long way from perfect, but its a start, and in the broad realm of PCR tests.

In all these studies, the researchers don’t actually know what the machines are smelling or what the so-called breathprint of a Covid-19 infected person is. “Once it is trained, the algorithm is then very much like a ‘black box’,” says Waterland.

He says it’s a lot like sniffer dogs trained to detect food, bombs or drugs (side note, there are dogs trained to sniff out Covid-19 too). The dog knows it’s Covid-19 but you can’t ask them what they’re smelling, because we don’t speak dog.

Other research groups, like this one in France, have started work on figuring the breathprint out.

But there’s another way to programme e-noses aside from using VOCs. They could actually sniff out the virus itself, or bits of it.

Sticking with the airport drug analogy, it would be the equivalent of those machines seen on Border Patrol where border officers pop a swab into a big box that then beeps aggressively if there’s a tiny trace of the drug.

Waterland is part of a New Zealand team that developed the proof-of-concept for such a device. It uses raman spectroscopy, which has nothing to do with the noodles and everything to do with seeing how light bounces off chemicals, to detect Covid-19 spike proteins that a person breathes out.

A person breathes onto a bit of paper loaded up with aptamers, chunks of DNA that stick to the spike protein, and nano-sized globs of silver. The silver acts like an antenna to magnify the signal to the spectrometer, Waterland explains.

The neat thing about this system is that you could find different aptamers for different variants or different diseases, so the system could evolve over time as the virus does. “The phrase is aptamer, right, so it adapts,” says Waterland.

An Australian group called GreyScan is developing a similar tech, although it’s unclear what exactly their machine analyses. GreyScan could not be reached for comment.

Co-developer of the New Zealand version, Deborah Crittenden, director of the biochemistry programme at the University of Canterbury, says their device holds real promise, both for the country’s airports and the current alert level 4/2 split between Auckland and the rest of the country.

“This would absolutely be useful for rapid screening at borders if (a) it can be converted from a lab-based method to point-of-use, which would require some engineering-type work, and (b) that its [true negative rate] holds up in real world scenarios,” she told The Spinoff in an email.

The group presented their system back in February. But after an initial flurry of attention for their device, things have gone quiet. Despite the urgency around Covid-19 science, a lot of scientists are still operating on shoestring budgets, she said.

Indeed, a lot of these devices are in the early stages of development, testing and commercialisation. Despite that, a select few countries like Indonesia is ploughing ahead and deploying e-noses in airports and train stations.