During her PhD studies, she became increasingly interested in understanding and exploiting the fundamental interactions of light with molecules. After a Department of Energy Distinguished Postdoctoral Fellowship at Sandia National Laboratories in Albuquerque, she joined Case Western Reserve University in 1997 to pursue this research.

In the Chemistry Department at CWRU, she earned tenure, was promoted to Associate Professor and started the Center for Chemical Dynamics. Along with her laser research, she fostered innovation in undergraduate teaching, women in science, and ethics in education and research.

In 2007, Professor Simpson joined The University of Auckland to take on a new challenge - to establish and direct the a new multi-user Photon Factory. Her appointment is held jointly in Chemistry and Physics.

The core mission of the Photon Factory is to bring the rich versatility of high-tech, short laser pulses to NZ academic and industry innovators. The facility has grown rapidly since it opened in 2010 - we now have over twenty students and employees who work on dozens of academic and commercial projects.  These range from evaluating the photobehaviour of improved solar energy harvesting molecules to fabricating photomasks for microfluidic chip production. Our activities include a recent spin-off company to make a novel cell sorting chip.

Professor Simpson's own research interests lie with the fundamental photodynamics of molecules in the condensed phase.  She and her students use ultrafast laser spectroscopy to study rapidly evolving molecules as they convert light to more useful forms of energy.

We want to give our students a path into business – to enable them to create their own jobs.

MacDiarmid researchers successful in 2019 MBIE round

Seven MacDiarmid Institute Investigators have been awarded $20.29 million funding for their research through MBIE Endeavour fund.

Read more about MacDiarmid researchers successful in 2019 MBIE round

Engender Ltd was formed by Principal Investigator Professor Cather Simpson in 2011 to provide a solution to the problem dairy farmers have of selecting the sex of their calves.

The MacDiarmid Institute is pleased to share the following successes from MacDiarmid researchers in this year’s MBIE Endeavour fund round.

Read more about MacDiarmid researchers successful in latest MBIE round

Following the MacDiarmid regional lecture series we have gathered some pieces where women in Nanoscience tell their stories.

Read more about Women in Nanoscience 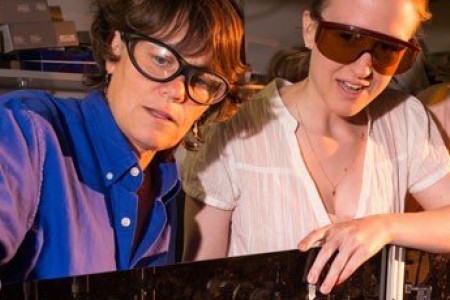 My entire scientific career is based on a bet over a pitcher of beer, when I bet that I would be able to measure the molecular scale heat in haemoglobin, and my advisor said it couldn’t be done. I did manage to, and this set me off in the direction my career has taken.

Congratulations to Associate Professor Cather Simpson on her company winning the AgTech section of the World Cup Tech Challenge in Silicon Valley.

Nature of Science – meet our scientists

Bill, Alex, Cather, Maan, Shaun and Sandy work at The MacDiarmid Institute - they all do science for a living, but have very different jobs and perspectives. One thing they all have in common is their passion for science.

Read more about Nature of Science – meet our scientists

Three MacDiarmid Institute nanoscientists tell their personal stories of life in science, and what it is like being a woman in the physical sciences.

AMN9 - Professor Cather Simpson talks about her work in photonics and her curiosity about how materials behave at the nanoscale.

Professor, Associate Investigator, and Director of the Photon Factory, Cather Simpson talks about her work in photonics.

The MacDiarmid Institute's Professor Cather Simpson talks about her amazing work, and why she loves being a scientist!